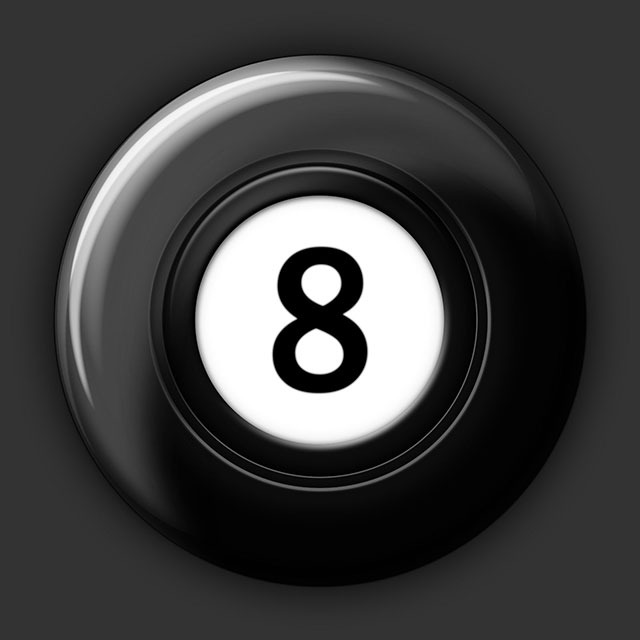 The 8 ball online is very easy to use. You just have to think about a question and click on the ball. After a few seconds, a clear answer will appear in its center.

What is the origin of the 8 ball ?

The main component of the Magic 8 Ball, the tube inside, was invented by A.C. Carter, who was inspired by a spirit writing device used by his mother Mary, a clairvoyant.
Then, the Magic 8 Ball was produced by Mattel from 1950.

It is supposed to predict the future and answer any question asked.

It has the shape of a black billiard ball, 10 cm in diameter, with the number 8 painted on the top in a white circle. The ball contains an icosahedron, a solid with 20 faces, floating in a dark blue liquid. Each face offers an answer visible through a round transparent window located opposite to the 8.

To use the ball, simply hold it in your hands with the number 8 facing you and ask a question. Then, turn the ball over (it is possible to shake it a bit before turning it over) and a triangle will appear with a message in white on the colored background.

Recognized by generations of adults and children alike, the mystical 8 Ball has become a pop culture phenomenon.

There are several other magic balls inspired by the original one, mostly marketed in the United States. The best known is the Pink 8 Ball, also known as the "Love-Ball". It is a version especially used for questions related to love or dating.

Some other versions are:

The Magic 8-Ball appears in many fiction.

The 8 ball is not about to be retired. There was even a rumor about a movie she would star in at Blumhouse.